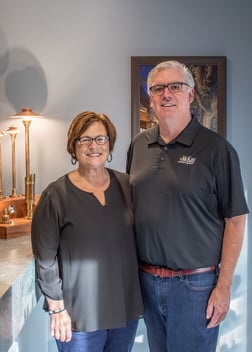 Jerry McKay is the owner, president, and primary landscape lighting designer of McKay Lighting. He is a native of Omaha, Nebraska, a graduate of Creighton Preparatory School, and got his B.A. degree from Seattle University. Jerry is a past board chair and is currently serving on the board at Jesuit Academy.

In 1987, he began a lawn care service company that over time, slowly evolved into an outdoor lighting company. The business officially re-launched in 1992 as McKay Lighting. Since then, the company has grown into a regional market leader and one of the area’s only dedicated outdoor lighting firms.

“I was privileged to be at the right place at the right time and learn from the “pioneer” of landscape lighting, Bill Locklin. That was in 1992. It’s hard to believe that we’ve installed thousands of lighting jobs all over the country and made so many lifelong friends along the way.” - Jerry McKay

Learn more about Jerry McKay and his story in the article, Finding Focus by Landscape Management»